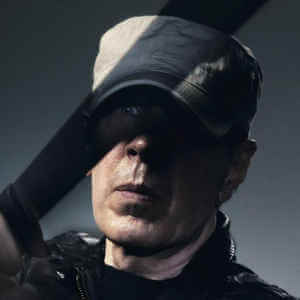 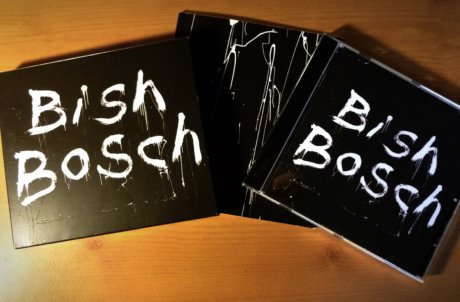 “I was thinking about making the title refer to a mythological, all-encompassing, giant woman artist.” Scott Walker

A Hieronymous Bosch painting can’t be apprehended in a single blink of an eye. The Garden of Earthly Delights is made up of panels in parallel, with scores of tiny actions and allegorical representations teeming in every square inch of canvas. The painting is big enough to encompass heaven and hell.

Perhaps we should listen to Scott’s music in the same way we’d approach a Bosch canvas. You probably won’t understand it after one viewing, but you can become obsessed with one corner detail another until you eventually come to some understanding of how the different parts fit together and complement each other.

“It’s moving on a bit each time we go. Hopefully it’s getting nearer and nearer the kind of thing that’s in our heads. Little things are improving, a bit more focused. The style is improving.”

Since the 1960s, Scott Walker has scaled the heights of pop superstardom, produced some of the most revered solo albums of the late sixties, coasted on his laurels during the seventies, then metamorphosed into something very different. The music he has been making at his own pace since the early eighties might be utterly estranged from the songs that made him a household name, but they stem from the privacy he requires to write this complex and hugely inventive music. 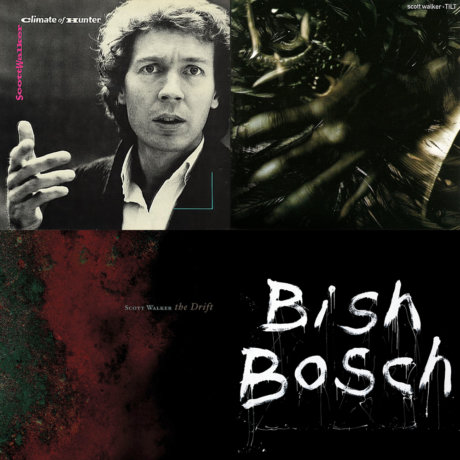 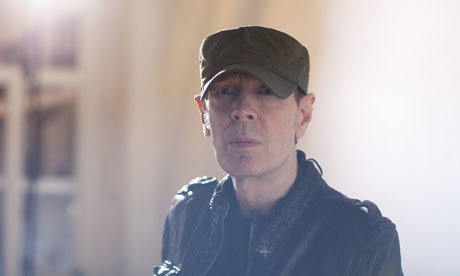 Bish Bosch is the latest in Scott’s discography to pursue the line of enquiry he began back in 1978, with his four devastatingly original songs on the Walker Brothers’ swansong, Nite Flights, and continuing through Climate of Hunter (1984), Tilt (1995), The Drift (2006). He has continued to mature and develop in a late style utterly at odds with the music that made him a superstar, a lifetime ago, but which is totally honest, uncompromising and transcendent.

Scott began writing his new material around 2009, and recorded it sporadically over the following three years, while he was also involved in composing a work for the ROH2 ballet Duet for One Voice, chorographed by Aletta Collins. Unsurprisingly for a long-term exile from his native America, Bish Bosch is a great melting pot of clamouring voices and languages, swift scene-changes (the album’s geographic reach covers Denmark, the Alps, Hawaii, the ancient landscapes of Scythia, Greece and Rome, and Romania), time-travelling jump-cuts, and metaphors from medical science and molecular biology that seize you by the throat.

If The Drift was a dark place, full of scorching orchestral textures and ominous rumblings, Bish Bosch is a tauter but more colourful experience, with greater emphasis on processed, abrasive guitars, digital keyboards and thick silences. Scott’s regular co-producer Peter Walsh, and his regular core of musicians, Ian Thomas (drums), Hugh Burns and James Stevenson (guitars), Alasdair Malloy (percussion) and John Giblin (bass). Guests include trumpeter Guy Barker and pedal steel guitarist BJ Cole, who worked on three of Scott’s mid-seventies LPs. Musical director Mark Warman plays a prominent role, both as conductor and keyboardist. “If I use the big orchestra I’m using it for noises or textures, or big pillars of sound, rather than arrangements,” Walker explains, adding that the sonic richness was achieved by means of a novel recording technique. “What we did was record the drums, bass, percussion, strings and vocals in digital and analogue simultaneously. Because we knew there were a lot of silences in it, especially in something like ‘Zercon’. And in the endings – the ending of ‘Tar’, where you don’t know what’s going on. So in those spots we just cut off the analogue, and where we had the silences we just used the digital. And then we turned on the analogue again when everyone was playing together. Everything was recorded that way, so it’s about eighty per cent analogue.”

Unlike so many veteran artists whose career hits a plateau, Scott refuses any nostalgia for his earlier achievements. For Scott, there’s never any looking back, and that determination to keep pushing forward, testing his limits (and those of his select band of musicians and collaborators) has resulted in some of the most visceral, inventive and electrifying music of the twenty-first century. It’s about pushing past the limits of what’s expected. It’s about refusing the assured standing ovations of the ‘retread your classic album’ scene, and striking out into consistently difficult terrain. It’s about escaping the tar-pit of your own past. Don’t look back.

Scott insists none of his work is in any way autobiographical. So you are compelled to re-think the way you experience music to get the most out of these pieces. Instead it’s more like a form of sonic fiction (magic realism, cut-up, sci-fi and historical reinvention all rolled up into distinct packages). There are frequently two, three or more ideas packed into each song: scenarios that seem distinct at first but whose connections are subtly revealed. The lyrics process a mass of data, set to music that often veers into filmic sound effects and Foley artistry. Songs leap across giant historical chasms or reach for the outer limits of space. A single number can contain references to molecular biology and sulphurous farts; quotes from the Bible and Hollywood film directors; medieval leather shoes and Algonquin chiefs. They unashamedly revel in unfamiliar words, technical terminology and obscure references, so keep a dictionary handy and bookmark Wikipedia. It’s all part of the fun.

For an example of Scott’s unorthodox songwriting techniques, take the album’s centrepiece, the twenty minute ‘SDSS1416 + 13B (Zercon, A Flagpole Sitter)’. The title contains two brown dwarves: one, the coldest sub-stellar body in the universe discovered so far; the other, Zercon, was a real-life Moorish jester at the fifth century court of Attila the Hun.

“I was interested in this thing about someone trying to escape his situation – in this case Attila’s wooden palace, which he regards as an immense toilet – and achieve a kind of spiritual sovereignty, and a height beyond calculation. As the song moves forward he imagines himself at different stages of height: he imagines first that he escapes and finds himself surrounded by eagles; then there’s the mention of St Simon on his pillar; then he jumps to 1930s America where it’s become a flagpole-sitter…’ Flagpole-sitting – trying to spend several days alone on a platform at the top of a pole – achieved a brief craze status in the 30s.

At the end of the song he eventually becomes a Brown Dwarf, known as SDSS1416. As with the majority of my songs, it ends in failure, Like a brown dwarf, he freezes to death.”

It’s not the only song that ends in death on Bish Bosch. ‘The Day The ‘Conducator’ Died’ is a charming little yuletide song (with sleigh bells that take on an increasingly sinister aspect as the song progresses) that juxtaposes a personality-profiling questionnaire with the execution of a hated dictator. Romanian president Nicolae Ceausescu and his wife Elena were executed without trial on 25 December 1989. None of the firing squad waited for the command to ‘fire’ before pulling the trigger.

“I’m fascinated by dictators,” says Scott, recalling that The Drift also included a song about the death of Mussolini (he was even singing about Joseph Stalin on ‘The Old Man’s Back Again’, on 1969’s Scott 4). Violence appears in other ways: in ‘Pilgrim’, for instance, a song that compares vivisectionists to kids who delight in torturing frogs. “I’m not particularly fascinated by brutality – I mean, at times I’ll use it on a comic level, or it’ll be angry, but I’m never striving for it – it just happens. I don’t know why – that’s for an analyst!”

Across the album, there are cameos and fleeting glimpses of powerful historical figures, many with blood on their hands: Donald Rumsfeld, the Ku Klux Klan, Attila the Hun, Ronald Reagan and Mikhail Gorbachev, Pope Julius II, and the ‘Conducator’, a title used by both Ceausescu and his predecessor King Carol II. Sterzing, the Tyrolean village mentioned in ‘Corps De Blah’, was notorious as a bolthole for Nazi war criminals in the aftermath of the Second World War.

At the same time, Scott takes a delight in crude humour, and the album is awash with insults and sardonic put-downs, slapstick, body parts and bad smells (check the tight-sphinctered emissions of ‘Corps De Blah’). There’s plenty of rough and tumble and visceral argy-bargy, too. ‘Epizootics!’ (as well as recalling 1940s hipster slang, the word means an unusually high rate of new infections within an epidemic – appropriately for a man who once had a hit with a song called ‘The Plague’, Scott’s music has often touched on disease) soundtracks its descriptions of sweaty street hassle with swinging, strident percussion and the raucous sub-tones of the rare brass instrument, the tubax, played by Pete Long. ‘It’s a combination of a tuba and a saxophone,’ explains Scott, ‘and there’s only two in the country. It’s a monster thing, you actually have to sit on the floor, it’s enormous. But it means you can get below the bass, very very deep.’

All of which shows the efforts Scott and his team have gone to invent sounds appropriate to these songs’ unique atmospheres. ‘Zercon’ features ramshorns, among them the kudu shofar, a monstrous natural instrument used in ancient times. On ‘Tar’, an argumentative piece which deals with ‘contradictions in the Bible’, Alasdair Malloy & Mark Warman brandishes some swishing machetes – four-foot blades which Scott was nearly banned from bringing into the studio. ‘Corps De Blah’ includes percussionist Alasdair Malloy chipping away with a chisel. These are songs in which every sound signifies, because it’s so intimately bound up in the words. “There is always meaning for me there; I don’t write haphazardly. I’m pretty sure everything is right and balanced, as far as I can get it. I won’t throw anything in that shouldn’t be there.”

So the foreign language in ‘Dimple’ turns out to be Danish, a reminder that Scott himself lived in Copenhagen for a while in the early seventies. “I read somewhere no matter how much your face descends with age, the dimple remains in the same place. In this case I’m using it as a metaphor for a constant presence, and building a kind of mythological face throughout the first part of the song.”

“I’ve always thought since the late 70’s, “This is my last record.” Every single record has been that way… I guess I just pull the trigger each time.” Scott Walker

Scott’s music may have changed irrevocably over the past five decades, but his unmistakable, magnificent voice, and his dogged refusal to choose the easy, popular artistic path, remain a constant presence in everything he does. How does Scott characterise his world view these days?

“I’m a pessimist, in that I know it’s not going to end well,” he says, with a laugh. “But most of my songs are spiritual at the core. I try not to be too cynical about things, because it’s too difficult otherwise. You have to be able to work your way through it – you have to be able to see what’s there, and deal with it.”

Bish Bosch is big enough to contain heaven and hell.

Rob Young is the Contributing Editor of  The Wire