Aha! Here we go! Wooooooooooo! Pet Shop Boys open their 12th album – and first self-released record – with a track that screams ‘yes! Freedom! Triumph! Techno! Men in hats! No not those men in hats, with their flaccid faux-sophistication and marketing blitzkrieg, but this charming pair who’ve flogged upwards of 70 million albums and redefined the connections between art and pop. Electric is their first album after leaving Parlophone to set up their own label x2 via Kobalt, and has Stuart Price on production duties. In a track that’s largely an instrumental banger (complete with amazing plastic trumpet tooting fanfares), save for repetitions of «electric avenue» and some lost wailing, the gritty sense of purpose and reinvigoration is palpable in brittle beats and tough synths that gurgle and grind. Anyone who’s seen Pet Shop Boys live will know that half the joy is in their architecturally brilliant stage sets, and it’ll be fascinating to see what they do to accompany this. Something betweenMetropolis and the place where everyone goes to get spangled on Soma and listen to the horns in Brave New World would suffice here.

A number that whisks together blue-eyed synth, funk and piano house, ‘Bolshy’ is the first of many pop corkers on Electricity. Neil Tennant’s vocal line «bolshy bolshy bolshy bolshy / where your heart leads I will go» glides across the surface like a yacht against a pristine tropical horizon, before synthetic handclaps gradually lead to an unexpected, tweaky build and drop at 4:40. Instead of using that as the excuse to do something daft and over-ooof the pudding, ‘Bolshy’ continues with its sun-dappled panache. This is Pet Shop Boys at their sexiest, most sun-kissed, a killer track. No wonder they’re booked for Sonar.

‘Love Is A Bourgeois Construct’

Oh my. This is the one. An utter classic in the vein of ‘Rent’ or ‘Shopping’, it achieves Pet Shop Boys’ knack of bringing politics into their music with a fine nod and a wink. After a melody that circles around like a Victorian organist sent into space, the verse of ‘Love Is A Bourgeois Construct’ is a straightforward ripped affair, with Tennant adopting a bit of a faux-naive vocal, the lyrics as ever marking out PSB as a band who don’t mind embracing where they hail from. «I’ve been hanging out with various riff-raff / somewhere on the Goldhawk Road» – it’s not the street name that marks this out as very English, but that placing of «various» before «riff raff». There’s an insane autotune tweak on the vocal at one point, before the magnificent chorus which is all massed choirs and organ riffs a la ‘Go West’. Plus «searching for the soul of England / drinking tea like Tony Benn» is one of the best lines in pop this year.

A moody, murky number, and one that starts with a solid, techno-inspired boom and whizz, with vinyl crackle too and what sounds like a sexual gasp chopped out and used as a rhythm. The whole thing sounds really analogue. This is shaping up to be the most dancefloor-oriented Pet Shop Boys album in years, and ‘Fluorescent’ in particular might lend itself to remixes, with a great street-lights-twinkling refrain now and then, and Tennant’s voice set low in the mix amid all the analogue whirling and fizzing. A classic Pet Shop Boys exploration of nocturnal decadence – «at midnight / it’s time for business… every scandal has its price».

After some abstract organ blasts, the ante is upped again with the rhythm, fragmented machine vocal as texture and 4/4 beat that kicks things off. «Taking a ride inside a dream,» sings Tennant, in a vocal melody that’s a distant cousin of Duran Duran’s ‘Ordinary World’ in its tone, while the xylophone plinking over the top recalls PSB’s own ‘Being Boring’. There’s a really nice contrast between that lightness and the juddering bassline underneath. The arrangement of this ‘Inside A Dream’ is excellent too – halfway through the track there’s a few radiophonic pips and it toughens up, Tennant’s vocal tied to a stern one-two before a rumbling breakdown to something more reflective. Subtle and strong.

‘The Last To Die’

Pet Shop Boys take the hoary bluster of Bruce Springsteen’s track (as featured on his 2007 LPMagic) and make a slab of politicised doof-pop. ‘The Last To Die’ has tinkling piano, Tennant sounding somewhat mournful before the 4/4 kicks in. The main chorus line («who’ll be the last to die for our mistakes / whose blood will spill / whose heart will break») is one of the album’s finest earworms, and is followed by some top «la la la-ing» (remember that ‘guitarist wanted’ advert the nascent Suede placed in Melody Maker which cited PSB as an influence, and you’ll be on the way). Once again, there’s judicious use of those Pet Shop Male Voice Choir vocals in the background. It’s one of the oddest cover versions you’ll hear all year.

If there’s any track that could throw cold water all over and short-circuit Electric, it’s this one. ‘Thursday’ has the kitchen sink and rapper Example thrown at it, but that’s the instinctive charm of Pet Shop Boys, an ability to do the incongruous without really seeming to care whether or not it works, and thankfully it does here. Another downbeat start, xylophone following the beat with the «don’t say it’s over… over…» hook introduced early on. It’s got everything this one, drones in the background, a pretty shifty bassline, before there’s another surprise – plastic trumpet sounds as Example recites days of the week and Tennant (in a fine vocal performance) implores someone to «stay for the weekend». One of many tracks here that cries out to be a single.

‘Shouting In The Evening’

And thus it goes Pet Shop Brostep. Really? Yes, really. As well as all the plane-over-the-Alpine-peaks synths and twinkling bits of melody here there’s a decidedly rough and rude approach to the rhythms, which lurch and gurn all over the shop. It’s a ludicrously over-the-top and in-your-face track the likes of which we’ve never heard from the Pet Shop Boys before. It’s camp and arch and offers up some serious welly, you get the impression that they must have had quite a lot of fun while doing it, and it’s the missing link between the Human League and Skrillex, in the best possible way.

And so Electric comes to an end at nine tracks with what might seem to be Pet Shop Boys’ paean to raving: «I like the people / This is my kind of music / They play it all night long… everything about tonight feels right and so young…» It then proceeds with clipping snare rhythms, Balearic synths, and fairly straightforward club rhythms. There’s also a vocoder vocal in there somewhere, but it’s mangled to all hell, as if the Daft Punk robots had fallen into an underwater blade in an ill-advised Bond cameo.

With no ballads and fairly economical in length, Electric is a fierce, energetic record that sees Tennant, Lowe and Price revisit their long-standing love of club culture, including rather unexpected forays into its brasher, Transatlantic version. ‘Boys’ done good. 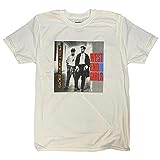